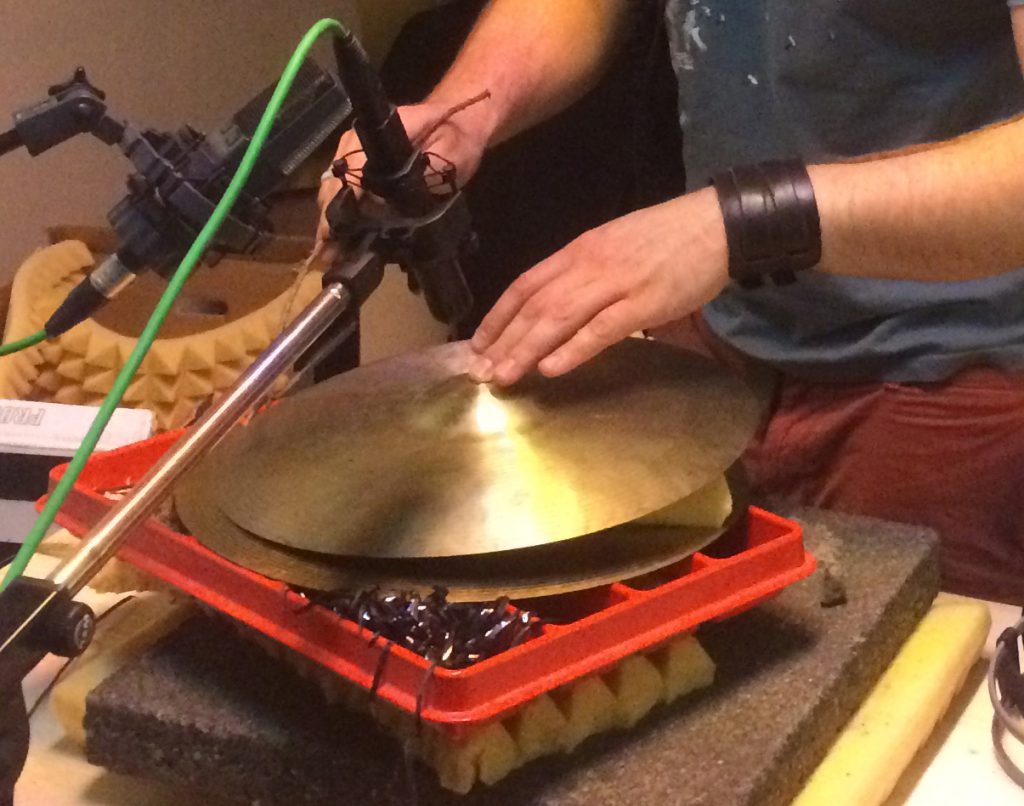 VR should really be an experience for all senses. Given the short time VR has been available, it is understandable that most of the current attention is focused on the visual component – the 3D, the positioning in the room, the all-around-view. And it should be celebrated for that, as it widens the scope of entertainment and eventually art in a fundamental way.

But real immersion – and good entertainment in general – does not work without all available stimulants working together. Sound is one of those stimulants that is too rarely recognized as the powerful tool it is – especially for VR. After all, VR stands for “Virtual Reality”, not merely “Virtual Vision”.

This is why since the very first stages of creating the game concept of Ixo, it was clear that just looking for some free soundsamples from the internet was not an option (pretty hard to find „spider walking on grass“ samples in the first place).

Instead, we wanted our own custom soundpool, and we wanted to ‘go foley’, meaning that any physical sound in the game world should be based on a real life sound recording.

Foley is kind of counter-intuitive. One would think that in order to recreate a sound, you would just have to repeat the action in the studio and tape it. However, for the majority of sounds, this is not how it works.

This will be a review of our ixo foley recording session and will hopefully show you one trick or the other about creating your tailor-made sound effects – not only for VR, but for videogames and even movies in general.

I will not go into all sounds we did that day, instead this blog will focus on some of the sounds directly connected to our protagonist, namely walking and jumping.

A good setup is of critical importance if you want your samples to be usable. For example: Don’t have a computer in the same room – the fans will be audible in the finished sample. The same goes for traffic noise, air conditiong and other ambient sounds. Best try to find a quiet room in a basement with no immediate surrounding noises.

Sadly, the simple 50$ microphone will most likely not do the job properly. Instead, you want a condenser microphone with a good signal-to-noise-ratio and a directivity suited to your needs.

The signal-to-noise ratio describes the difference in volume between the sound you want to record and the background noise produced by the microphone itself. For normal recordings, the signal, let’s say a voice, is rather loud and background noise usually isn’t a major problem.

However, for very subtle sounds like a little twig tapping something, the rules are different. When you increase the volume of the whole sound to a regular level afterwards, you automatically raise the noise volume by the same amount. This is where less sophisticated microphones fail to produce decent raw material, and also where noisy surroundings risk ruining the recording. Yes, there are noise reducing plugins that can process the audio afterwards, but the goal should always be to start with the best possible raw material.

Once you have a good setup, you can focus on the actual sound properties.

It’s not about volume, but about the correct composition of frequencies.

Raise the volume of your very quiet sound, and you will discover whole new layers of sound that you wouldn’t normally hear at all. In combination with a decent pitch shift, this is the way to create epic sounds from very small objects.

Our setup was as follows:

This list is just for informational purposes. There are literally dozens, if not hundred excellent microphones out there.

I met up with Chris at Körnerstudio, a local Recording Studio in Cologne, Germany. Chris is not only an old friend of mine, but also a gifted sound designer and professional audio engineer of Cologne’s City Theatre. Chris’ involvement in Ixo is not limited to the foley sounds – he has also written several ambient musical soundscapes that I can’t wait for you to hear.. But that will be the topic for another blog entry.

First, we put on headphones and compared different microphone positions with the heavily amplified recording signal on our headphones. This step must not be underestimated, as the microphone position has a significant impact on the resulting sound. So take your time to fiddle around a bit while listening in real time what is changing while you move around your sound source. If you have a microphone with switchable directivity, try different settings, too.

The result of our little test series was as follows:

The Neumann KM105, usually a very good microphone, produced the weakest output signal in comparison, and we ended up not using it.

In the above list, notice the different distances of the microphones. It’s good to later have the option to use a very direct signal with a more ambient one.

In Ixo, Footsteps are the single most prominent sound in the game, especially with our little spider creature. If they don’t differ enough, if there is not a lot of variation, then the immersion will suffer after a relatively short period of time, and the best visuals can’t change that. As ‘leg props’ to hit the ground with, we had several objects like forks, pencils and twigs, but we settled on the good old chinese chopstick, as it produces the purest, most undisturbed sound.

So, how do you imitate grass? Of course, you can just record grass, but it turns out grass is very silent. The sounds you can record are very dim – a bad premise if you want to achieve a full and rich sound environment.

We needed something that would be a bit louder, without losing the characteristics of grass rustling. The unexpected answer: Audiotape!
We rolled down about 30 feet off an old audio tape and stuffed it into a small tray, then patted into it with the chopstick.

Now the key is to close your eyes while listening – what are you seeing? If you still see a chopstick on audiotape, then something is wrong. But if a tangible, credible scene builds in your imagination, depicting someone walking through grass and strafing bushes, then you are on the right track.

Here, the target sound would be fast-paced steps on metal grates, in an confined area. We definitely needed some clanging and a much less subtle sound than before. We used two cymbals from a drumset. At first, the sound resonated for too long. Well, you can’t blame cymbals for that, can you? We then continually added isolation between the two cymbals and balanced it out so the two cymbals would very lightly touch now and then.

Also, while recording, we pressed a hand onto the center of the upper cymbal, being able to further the damping of the sound at our own control. This time, our leg was a little fir twig which we used to hit the outer rim of the upper cymbal. 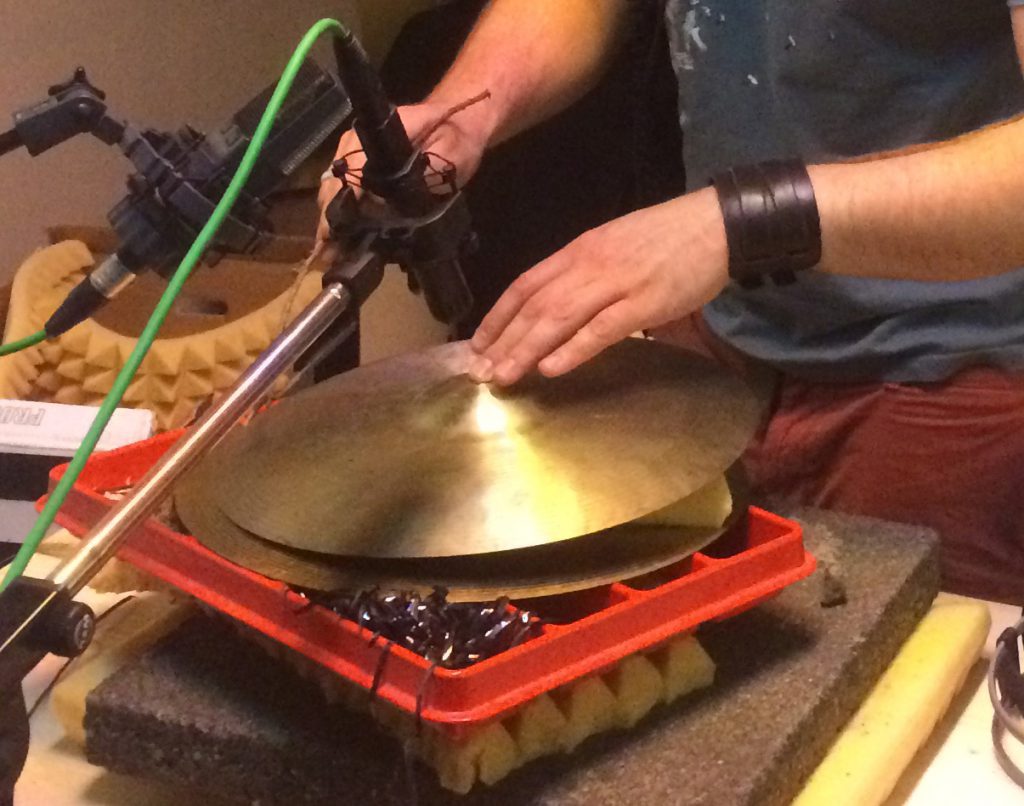 Landing from a jump

How do you get the physical component into the sound? How do you get that “thud” that implies real weight? It looked like little sticks and twigs would not do the job. We instead tried with a large carrot. It was the perfect choice, producing that thud…

but there was another problem: as long as we were holding the carrot while hitting the sand with it, it would not feel as if something really was falling. On the other hand, literally dropping the carrot head-on into the sand would result in the carrot falling over, ruining the pure sound that we were after.

We finally just piled up a steep heap of the sand/stones mix and then dropped the carrot into the center so that it would sink in enough to not fall over due to the surrounding matter.

This was definitely the most fun part of the whole recording session. Of course, us jumping up and down and recording that would not sound great. After all, the game has quite a few platformer elements, so a jump needed to be some more intense, satisfying sound, transporting that energy. We had three large branches (bambooe, cherry and robinia), but soon fell in love with the bamboo branch.

You want your branch to be approx 40”-60in length and less than 1” in diameter. Gather several branches, as each branch sounds different. Hold the branch around 1/3 from one end, and then -swoosh- it really heavily.

Really try to cut throught the air fast. Then try it a little softer and compare the results. But don’t do it too close to the microphone, as the sound will be uneven if you do.

You will recognize the result from many cartoons and movies. Looks like they swung branches as well!

Stay tuned for Part II in one of the next posts, including some finished sounds and covering the following topics:

Hope you enjoyed this little excursion. If you have any questions, leave a comment.